We offer you the chance to have your own arrangement of mosaic using two materials, the first is a handcut clay terracotta tile which can be left Natural in a skin colour and use a stain seal or we can put them into a furnace to add one of 77 vibrant hand-coloured glaze finishes (See our colour charts). These are wonderfully rich colours which allow some depth and variation in the tones offering a character unseen in the dull ceramic tiles made in factories. We design these for our stock in contemporary styles and patterns but import them from Marrakech supporting the continuation of artisanal skills and the communities relying on these craftsmen. Terracotta tile is for all periods and weather except freeze-thaw periods, we recommend the the tops are lifted off (they are not connected) and then they can be easily rolled into a shed for protection and longevity. See our Guide Section for Material and Maintenance. 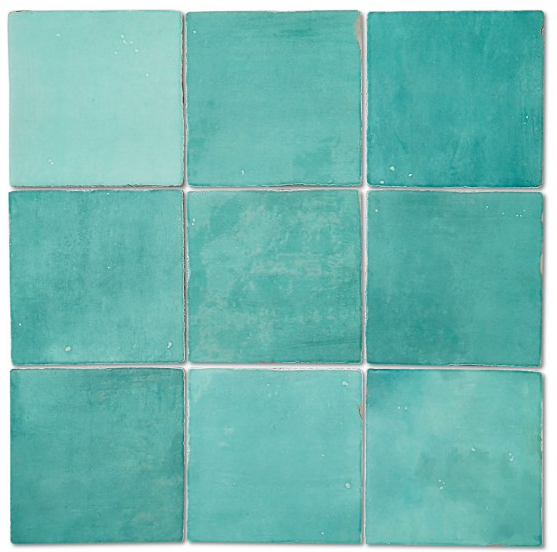 See our colour chart to choose for your own design or check our available stock in a size you seek, and have a personal delivery.

“Zellige” mosaic tile, has a long history in Morocco in the cities of Fez and Meknes. Zellige first appeared in Morocco during the 10th century. Because of the hand labour required and such costs associated with Zellige, only the rich could afford to decorate their homes with it and it was a mark of wealth and sophistication. Zellige as an architectural statement of importance was also widely used in mosques and palaces. In its most popular forms, Zellige can be found in fountains, on ceilings, floors, tables and columns.

To begin making Zellige, special clay from Fez is mixed with water. Then, it is kneaded, with both hands and feet, until the clay becomes flexible and homogeneous. It is cut into 11cm squares with a thickness of 12 mm. The tiles are sun-dried and then baked in a special oven.

Tiles are enamelled and then baked for a second time, at 800°c, in a special oven fuelled by olive pits. This is integral to and distinctive of our manufacturing process. Importantly in the oven, the tiles are placed at height according to colour; white on the bottom, then blue, yellow, and green tiles on top. differences in heat result in the differences in colour, including variations within the same colour group.

Tiles are taken to subdivide with a special hammer by very adept craftsmen, the forms making the design are then placed upside down on the ground ready to receive the reinforcement and rim of steel, and a screed leveller is poured over all in order to dry out in the sunshine. Once it is dried out fully the platter tabletop can be raised up and turned and cleaned down to show minimum requirement for grout. 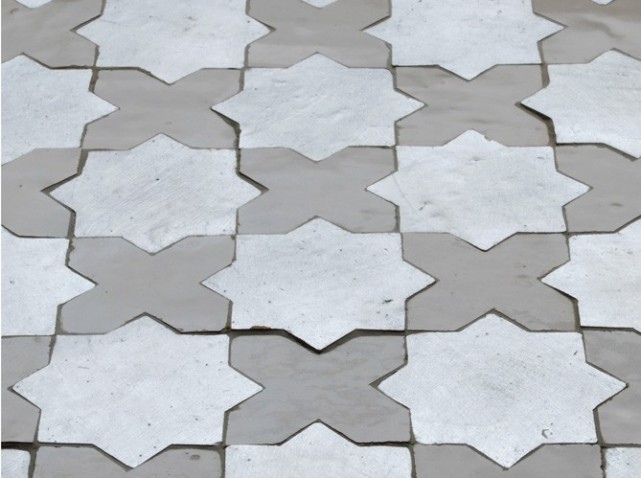